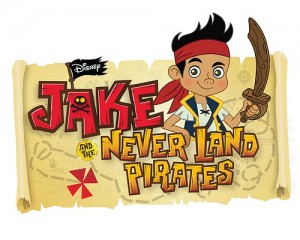 At the Disney Social Media Mom event this past spring, the kids were introduced to Jake and the Never Land Pirates. It is the number one series for boys ages 2 – 5 and on track to be the Disney channel’s number one preschool series ever. I can see why as both of my kids enjoy watching this show.

A music-filled interactive treasure hunt, Jake and the Never Land Pirates introduces a crew of kid pirates – leader Jake and pals Izzy and Cubby – and follows their Never Land adventures as they work to outwit two infamous characters, the one and only Captain Hook and Mr. Smee, from Disney’s classic “Peter Pan.” Along the way, they model teamwork, problem-solving and physical activity, earning gold doubloons as they conquer a variety of tasks. The series features original “pirate rock” music performed by Sharky and Bones of The Never Land Pirate Band.

Sofia and I had an opportunity to watch the special December holiday episode of Jake and the Never Land Pirates and loved it! Just a warning that the songs WILL get stuck in your head!  The Never Land Pirates crew in the “It’s A Winter Never Land! / Hook on Ice, Jack, Izzy, and Cubby” awake to find that Peter Pan has left the cew some presents and a tree to celebrate Winter Treasure Day, and Captain Hook invites Jake and the crew on a winter treasure hunt, ay, ay! Set your DVRs as it premieres on Friday, December 2, 2011 at 8:30 a.m. EST on the Disney Channel. See a preview below:

Disney Junior is listening to moms and they are offering Disney Junior 24 hours a day starting in early 2012. Not that your kids should be watching 24 hours but sometimes you want something for your younger kids in the evenings and none of the other channels are really offering that at this point.

A Jake and the Never Land Gift pack was sent to me in exchange . Rest assured, this Post was written by me and was not edited by the sponsor. Read more on my Disclosure Policy.