You are here: Home / Sponsored Posts / Jeremy Fink and the Meaning of Life Review + Deal

Jeremy Fink and the Meaning of Life from www.Phase4Films.com is now on DVD and digital video. This PG rated, family friendly movie is great idea for a family movie that you will comfortable with the entire family viewing!  Plus, right now it is available on Amazon for just $9.99 ($29.99 SRP.)

Jeremy Fink receives a mysterious wooden box a month before this 13th birthday with the words “The Meaning of Life.” He is to open this on this 13th birthday. But where are the keys to open the locks? Jeremy and his best friend Lizzy use their imaginations to search throughout Manhattan for clues. They meet all sorts of interesting characters on the way. 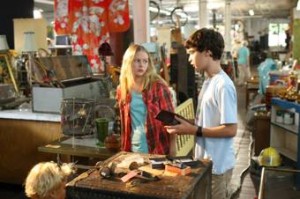 Jeremy Fink and the Meaning of Life is based on the beloved book by Wendy Mass. The movie is directed by Tamar Halpern, who gives an answer to why specific actors were chosen for the movie:

What made you choose these specific actors?

Maxwell Beer, who plays the title character, was an easy fit because he IS Jeremy Fink.  Awkward and adorable, he embodied the role.  Ryan Simpkins, who plays Lizzy, is a strong actor who could handle the sassy lines with ease as well as be openand vulnerable to help bring the film to a deeper level.  During rehearsals, as we worked on the scene where Jeremy destroys the time machine, there wasn’t a dry eye in the house when Ryan delivered her lines. The same is true every time I see thefilm.  Max and Ryan had incredible chemistry off screen as well and the proof is in the hilarious blooper reel on the DVD.

Mira Sorvino is an incredible actor to work with because she made beautiful suggestions that resulted in a page one rewrite of Elaine, Jeremy’s mother.  Mira gave me the freedom to develop a mother-son relationship that was much more like my own relationship with my son.  I love the scenes between Jeremy and Elaine and incidentally, my son wrote the music for the emotional last scene between Jeremy and his mom, where they talk about the Shel Silverstein book The Giving Tree.

Joe Pantoliano was a lot of fun to work with as he brought a whole layer of magic into Oswald and improvised some great lines that stayed in the film (“Have you ever read Eckhart Tolle’s The Power of Now?”).  A lot of his lines were improvised which was a credit to our editor, Maria Cataldo, who made those scenes really work. Michael Urie (Ugly Betty) was a perfect choice to play James, the mysterious limo driver who watches over the children and reveals all the secrets at the end.  He’s a friendof mine as is Betsy Brandt (Breaking Bad), who plays Madame Zaleski, which is the only scene in the film that makes grown men laugh out loud! Betsy’s an extremely talented comedic actor who I’ve worked with many times.

The older kids understood the plot of this movie but all of them enjoyed it! I would recommend as a family friendly movie!

I received a screen copy from Child Play Communications. Rest assured, this Post was written by me and was not edited by the sponsor. Read more on my Disclosure Policy.