You are here: Home / Articles / Money Talk For Newlyweds: Get on the Same Page When It Comes to Finances 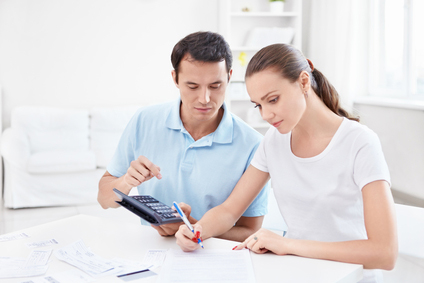 On the wedding forum TheNext.com, user SmrBrd2012 responds to the question “What do you wish you knew before you were married?” by saying she has had a hard time understanding the concept of “our money.” For a few years, her husband worked part-time while going to school full-time, and the couple mostly lived off “her money,” she writes. Money matters take many couples by surprise, even though it’s well-known that money is one of the leading reasons couples fight. Sixty-five percent of couples say they fight about money, and 10 percent of women admitted to having a bank account that their husbands know nothing about, Manilla reports.

From the J.G. Wentworth Twitter feed comes this quote:

Take a weird attitude toward debt: Avoid it. As newlyweds, it’s likely you’re carrying a lighter debt load than your parents and their parents. Census.gov says these age groups carry the largest debt loads:

Americans under age 35 carry an average debt load of $45,300, which is well under the national average of $70,000. One reason Americans 35 and older carry more debt is because they have mortgages. According to the National Association of Realtors, the average age of the first-time home buyer is 31.

If one partner likes to spend money while the other prefers to save, can this work? Yes, but you’ll have to meet in the middle. The saver can help the spender by budgeting for expenses and curtailing binge spending and spontaneous shopping sprees. The spender can help the saver enjoy his or her earnings by setting aside “mad money” to be used for weekend excursions, wardrobe updates, things for the home and gifts for each other. Each partner should acknowledge his or her attitude toward money and respect the other’s attitude. Set ground rules together and hold each other accountable when one slips up.

If you enter your marriage with a lot of credit card debt, make paying down the debt your top priority. Start with the smallest balance—Card A—and increase the minimum payments so you can pay it off early. Meanwhile, continue making minimum payments on your other balances. Once Card A is paid in full, take the amount you were paying to it and apply it to Card B until it is paid off. Continue this method until all loans are repaid. This is called a snowball plan to debt reduction.

Finally, learn how to talk to your spouse about money—the more comfortable you are doing it, the less likely you’ll fight about it.