You are here: Home / General / NYC: All You Magazine Panel 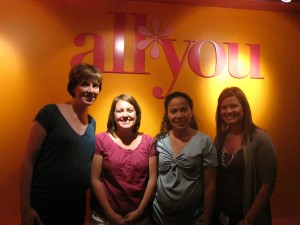 Not the best picture above but if you follow me on facebook, you may have seen a picture or two from the professional photo shoot.  Ya’ll know how much I love All You Magazine because I talk about it all the time. So when they asked me if I wanted to come to New York City for a blogging panel at their headquarters, I screamed yes! Mercedes @ Common Sense With Money, Erin @ Coupon Cravings, and Andrea @ Mommy Snacks were the other fabulous bloggers on the panel.

The first day, Andrea and I were able to get lost in the city before meeting Mercedes for the first time.  Shortly, thereafter Erin showed up and the party was on. We had a delicious dinner at the Harrison in the West Village with Susan and Jennifer from All You magazine. I think we could have chatted all night long!

We had a busy day! Photo shoot in the morning which was absolute fun with the other ladies. We had an informal lunch with the editorial staff at All You Magazine. Later in the day we had a meeting with the Sales and Marketing people. We were able to learn the ins and outs of the magazine and share our insight.

Let me tell you, they – meaning everyone associated with the magazine –  really want this magazine to be all about YOU! I was a little intimated since these were people from New York City but they were all real people who are very down to earth. They even have a brown bag challenge to see how much they can save by brown bagging it. Which probably saves people in New York City more than most since anything in the city is expensive!

Look for even more great things to come from All You Magazine online and in print! There are several things I’m very excited about and can’t wait to see how it all comes together.

Bonus: As we were waiting for our photo shoot we saw Vanessa Williams walking down the hall way – Mode Magazine style! Another highlight was seeing a CVS/Pharmacy. Though, I bet they don’t get the same Extra Buck deals in the city as the rest of the country.

On a side note, due to bad weather, my flight was cancelled.  All You (Jenn – Thanks!!!) & their travel agency were very kind to help me find a hotel to stay at and I’m rescheduled to fly out in the morning. However, I can not say that the folks at Delta Airlines were quite as accomadating. While the reasons for cancellation were beyond their control and I would prefer to fly out in safe conditions, they didn’t seem to have the organization or communication skills to really help out their customers or let us know what was going on.

Be sure to check out and sign up for the All You Grocery Challenge!