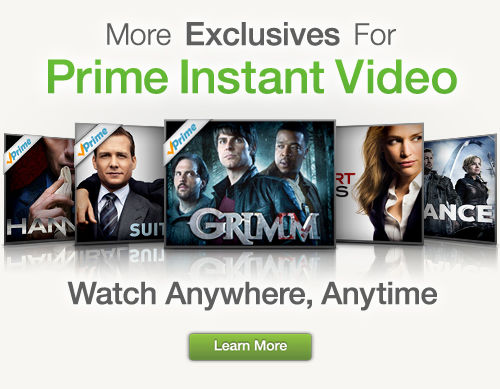 Wow! Amazon has finalized a deal with NBC/Universal  Grimm Season 1, Suits Season 1, and Covert Affairs Seasons 1-2 launching today, and two new series: Hannibal coming later this year, and Defiance early next year. Amazon Prime will be the exclusive subscription service for streaming all of these hit shows for the next 4 years! I’m a big fan of the show Covert Affairs!

They are also adding fan favorites like Smash, Eureka, Warehouse 13, and Alphas as well as more kids’ shows like Curious George and the Land Before Time (that’s my time!) You can also enjoy The Hunger Games as well as the new Amazon Original Pilots!

In addition to unlimited streaming of more than 40,000 movies and TV episodes, Prime offers unlimited free two-day shipping on millions of items and the Kindle Owners’ Lending Library—choose from more than 300,000 books to borrow as frequently as once a month with no due dates. Learn more about Amazon Prime.