You are here: Home / Freebies / Phineas and Ferb: Across the 2nd Dimension Original Movie 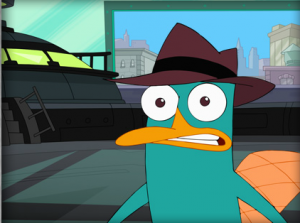 Love Phineas and Ferb? If so, you and/or your kids ;) will be excited to know that the  Disney Channel Original Movie “Phineas and Ferb: Across the 2nd Dimension” will be premiering on Saturday, August 13, 2011 at 10 a.m. ET. I try not to think too much of the theme song as I usually get it stuck in my head!

When the boys finally discover that Perry the Platypus is in fact a secret agent who battle the forces of evil daily, they join him on a grand adventure that blasts them to another dimension where Dr. Doofenshmirtz has taken over an alternate Tri-state area. When they uncover his ploy to travel back to their dimension to take over their Tri-state Area, the gang, as well as their alter-egos, must band together to stop him.

Disney has also launched “Perry the Platy-bus On Tour” featuring a 27 foot long customized, round aluminum Airstream trailer outfitted stem to stern as Phineas and Ferb’s teal colored pet platypus.  During the tour, fans are invited to marvel at nearly 4,000 pounds of Perry, come aboard, play the exciting new Unity 3D online game, “The Movie Game: The Dimension of Doooom!” and video console games, sing Perry-oke, and more! ALL FOR FREE!

Check out a preview of the new movie “Phineas and Ferb: Across the 2nd Dimension” and be sure to tune in on Saturday, August 13, 2011 at 10 a.m. to the Disney Channel:

A Phineas & Ferb package was sent to me by Child’s Play Communication. This Post was written by me.  Read more on my Disclosure Policy.