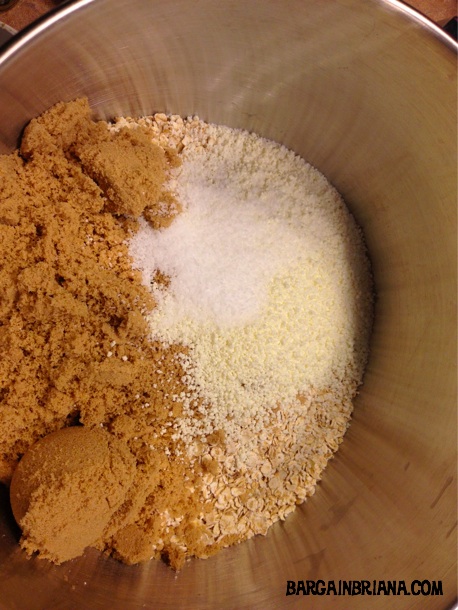 My youngest son loves his morning oatmeal. So much so that if we don’t have any in the house, it may cause a incident. He is very specific on the way he wants his oatmeal to taste from the amount of brown sugar to how milky it should be. We must adhere to these guidelines or school mornings will not be pleasant.

In the past, I’ve purchased the instant oatmeal packets at the grocery store or ALDI as it is worth the price of around $1.99 – $2.50 for a package of 10 to keep him happy in the morning. However, then he started eating two packets each morning, which means one package would not last long in our household, especially if someone else wanted oatmeal in the morning. We do have six people in our household so a box of instant oatmeal packets could be wiped out in one meal!

During my most recent bulk and freezer cooking day, I adapted slightly the recipe from the Your Mother’s Make Ahead & Freeze cookbook. They have been a HUGE success! I was a little concerned that he would be unhappy because they weren’t from the same packets as his normal brand. Instead, he has told me it is the best oatmeal ever. Success! Plus, I’m saving so much by making my own packets instead of buying oatmeal packets as a huge container of quick oats are just around $2.19 at ALDI. I only used half of the container to make 24 DOUBLE packs of oatmeal. The cost of the brown suger, powdered nonfat milk, and salt are insignificant as I already had these things on hand. 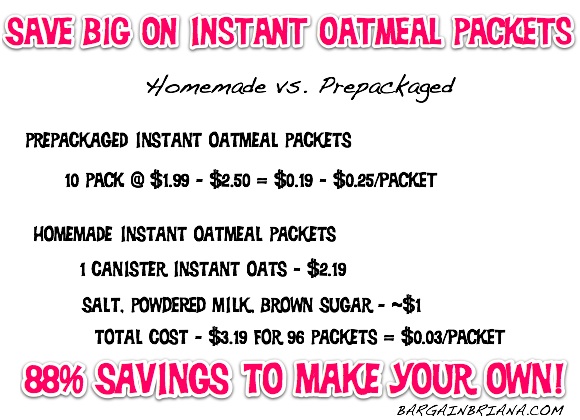 You may need to add in the cost of packaging for your single packets or you can combine all together and scoop out on a daily basis. For time savings and to be sensitive to the morning routine, I made my own single packets with snack size serving storage bags. These are usually around $1.99 for a package of 50, which is $0.04/bag. This makes your packets $0.07, which is still significant savings.

This is super simple to do and it is easily customizable if you like different varieties. 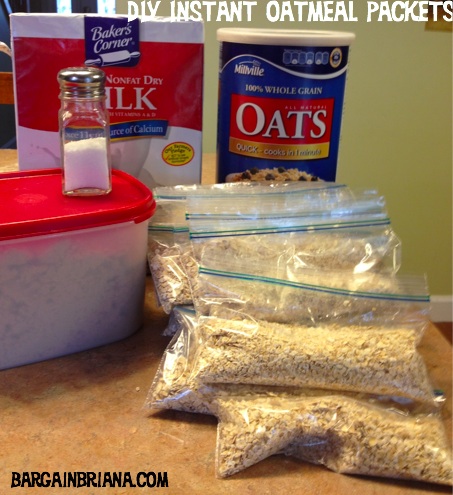 Other ingredients you could mix in would be small pieces of walnuts or almonds, dried cranberries, dried blueberries, dried banana chips, or other dried fruits. There are so many delicious possibilites.

To serve, add milk or water to get to desired consistency. Microwave on high 1-2 minutes.