Udi’s Gluten Free Foods sent us over a variety pack of six breads to participate in their recipe challenge. Udi’s Gluten Free is committed to creating delicious baked goods, which just happen to be gluten-free. We don’t eat gluten-free in our household but it is something I’m hearing more of!

Gluten is a protein found in wheat, barley, rye, and is often using as an additive in other foods as a stabilizing or thickening agent. Some people can not tolerate this. There are varying degrees of intolerance from a slight annoyance to a severe reaction. Bread, which is a staple for many of us, is typically made from grains that contain gluten like wheat. Udi’s products are completely gluten-free and made with the highest quality of ingredients so they are good for you. 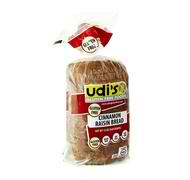 Upon opening the package, the cinnamon bread smelled wonderful. The bread I noticed was smaller than normal size bread. We thought it was kind of “cute.” If bread can be cute that is!

What to do with it? The first thing that came to my mind was Turkey Manhattans, which is usually a quick dinner I can whip up. It was also going to take care of that nagging lunch meat we had left in the fridge. Plus, the potato buds I had in the pantry are gluten free! 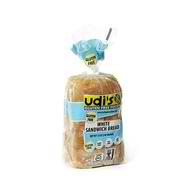 The kids were a little concerned that the bread looked different than usual. However, everyone seemed to enjoy their meal!

Now, I will say that the bread by itself doesn’t taste as soft as I normally like my bread. It seems a little dry but it could be because of the way my products were shipped.

You can enter up to 4 times with the following methods:

1. Leave a comment: How would you use your bread?

**If you are reading in an email or a feed reader, you must click over to enter this giveaway. Entries via email are not accepted.

2. Subscribe to my FREE newsletter. You must confirm your email for a valid entry. If you are already a subscriber, leave a comment letting me know you are already getting the bargains in your inbox!

Winner will be chosen by random. Be sure bargainbriana@gmail.com is in your safe sender list as you don’t want to miss the email if you are the chosen winner. U.S. Entries only. Alternate entry: Mail a postcard with the giveaway you are entering along with your name, address, and email to PO Box 14, Tipton, IN 46072.

**Please note: The companies have 6-8 weeks to ship prizes.

I was given a 6 pack variety pack of Udi’s bread to facilitate my post.  This Post was written by me and was not edited by the sponsor.  Read more on my Disclosure Policy.