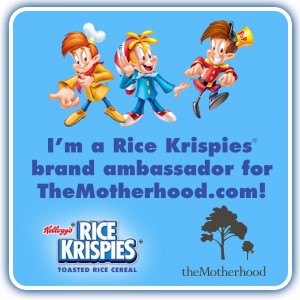 Along with nine other mom bloggers, I was asked to participate in the Rice Krispies Recipe Challenge. My family loves Rice Krispies and since the box of Rice Krispies along with the marshmallows arrived, the kids have been begging me to make the treats.

To start with, each bloggers was given one clue and as a group we were able to figure out our clues all added up to “Make your Rice Krispies Treats Recipe an after school conversation starter.”  After we figured that out, we knew our theme.

As many parents know, dragging out stories about school can be difficult. If you have something that can get the conversation going, maybe you can move the conversation more smoothly.  Hopefully, you will find my idea to be helpful in getting YOUR after school conversation started! Melt the butter and marshmallows according the instructions on the box. In a separate bowl combine the Rice Krispies Cereal along with the dried fruit. Place in your pan as directed. I like to use wax paper sprayed with cooking spray to spread around. Makes it much easier. Then cut into squares and decorate with decorating gel. I put a few topics that would make for fun after school conversations: Recess, Lunch, Friends, A,B,C’s as well as a few things that should resemble pencils!

It is just yummy too! The dried cherries and blueberries makes this traditional recipe even more fun and tasty!

Give me your best ideas on how to get the conversation started after school for a chance to win (2) Snap Crack & Pop Bowl!

Materials and compensation were provided by the Motherhood and Rice Krispies as part of the Rice Krispies Recipe Challenge. Post was written 100% by me and was not edited by the sponsor. Read more on my Disclosure Policy. You can see complete rules here.