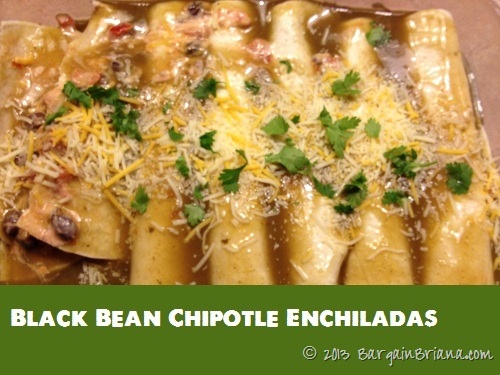 When I cook a meal with meat, I usually cook a vegetarian version for the two vegetarians in our household as well. I made the Black bean Chipotle Enchiladas the same night I made the Green Chilies Chicken Enchiladas. I would make these again as they were very tasty with just a hint of smoky flavor. You could also add a little bit of corn to this recipe for more veggie power! I was also able to utilize several pantry items for this recipe including cream cheese, black beans, and green enchilada sauce as part of our 2013 Pantry Challenge.

To get started with the Del Monte Southwestern Tomato Kick-off Sweepstakes, you will need to be a member of Pinterest. Then you will need to create a Pin Board with the Title ” Del Monte® Southwestern Tomato Kick-Off.” Repin at least two recipes from the Del Monte Pinterest Board and at least two other football entertaining ideas. Then register your pin board to the Del Monte page from now until February 15, 2013 to be entered. There are great prizes including a Sony 55″ LED TV, Bose home theater system, and Sony Blu-ray player! Wow! See the official rules here.

Stay tuned for a great giveaway where you can win your own prize pack!